The Commitment Ladder (A Short Course in Increasing Employee Engagement)

A mentor of mine, the late Gordy Myers, was a master of organizational change. Over the years he watched leaders create change plans that presumed the people impacted by the change would be on board or get on board quickly. Rather than get dazzled by the plans or the bright future ahead, Gordy was a “commitment” guy. Knowing that change would fail without the requisite level of commitment, he came up with this diagnostic to help leaders assess where their people were when it came to the forthcoming change. 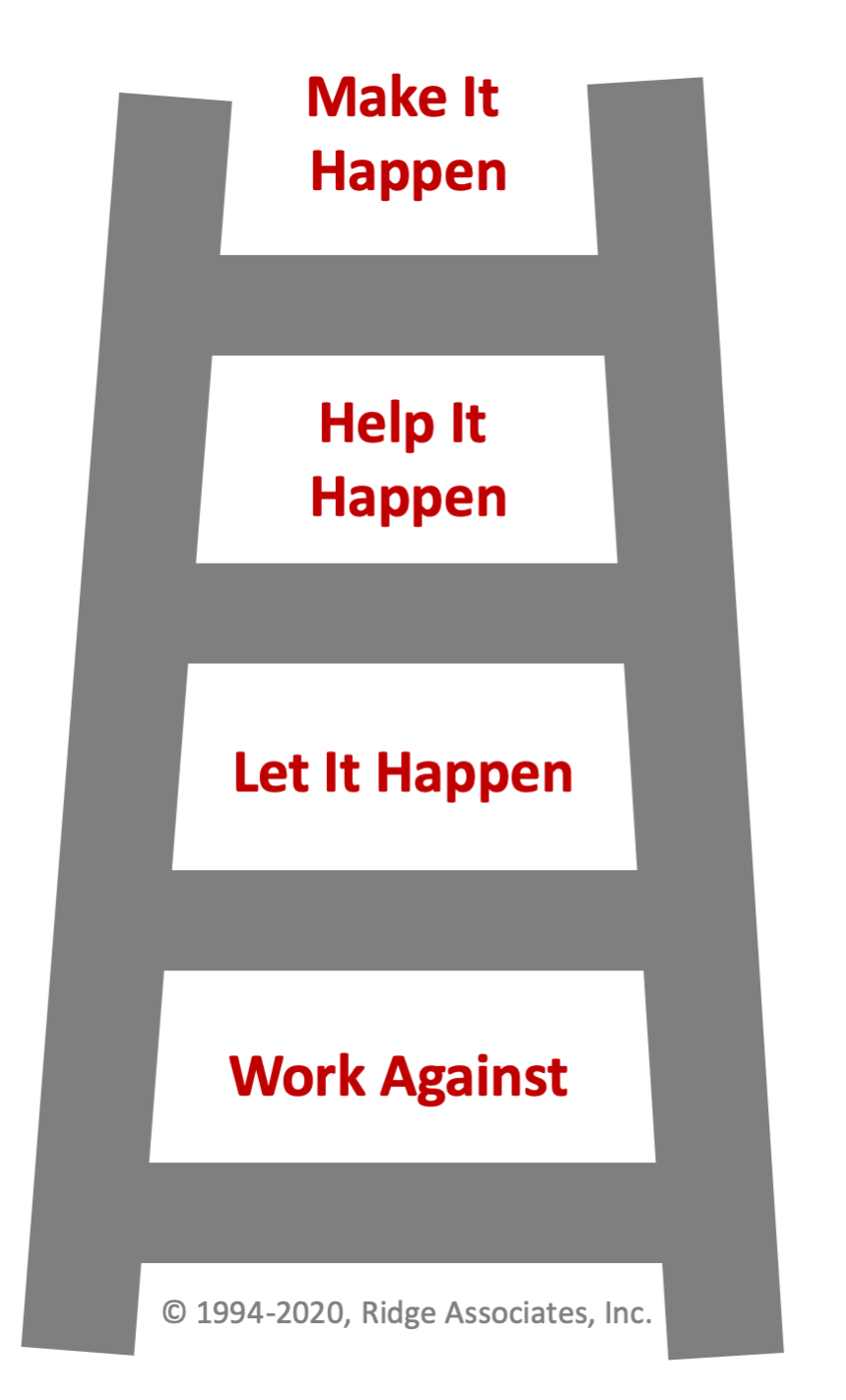 What Gordy realized was that most leaders’ default is to want everyone to be on the “Make It Happen” rung. To get people there, they can oversell a change and the imagined future it represents.

But people don’t stay on a given rung. If leaders do their jobs well, they move up. As the change process wears on and the bright shiny vision fades, people often move down. This “change fatigue” is a major reason why 70% of change efforts stall or fail.

Gordy’s genius was realizing that the key to success wasn’t getting everyone to “Make It Happen.” In any change – even change people want! –  endings and losses are involved: familiar ways of working are gone, and often close work relationships can grow distant or disappear.

Given these realities, getting everyone amped about change isn’t the way to boost or maintain commitment. Gordy coached leaders to look at the specific needs of stakeholder groups and find out what it would take to move up one rung. If you help someone who’s at “Work Against” step up to “Let It Happen,” you’ve reduced resistance and made your job easier.

Here are some strategies you can use to increase engagement and move people up the commitment ladder:

What tips would you add to this list? Feel free to leave a reply below or on LinkedIn.

This website uses cookies to improve your experience while you navigate through the website. Out of these cookies, the cookies that are categorized as necessary are stored on your browser as they are essential for the working of basic functionalities of the website. We also use third-party cookies that help us analyze and understand how you use this website. These cookies will be stored in your browser only with your consent. You also have the option to opt-out of these cookies. But opting out of some of these cookies may have an effect on your browsing experience.
Necessary Always Enabled
Necessary cookies are absolutely essential for the website to function properly. This category only includes cookies that ensures basic functionalities and security features of the website. These cookies do not store any personal information.
Non-necessary
Any cookies that may not be particularly necessary for the website to function and is used specifically to collect user personal data via analytics, ads, other embedded contents are termed as non-necessary cookies. It is mandatory to procure user consent prior to running these cookies on your website.
SAVE & ACCEPT